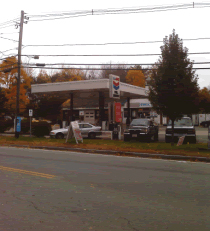 SAK Environmental, LLC assisted a confidential major lending institution in determining environmental risks at a commercial property as part of foreclosure proceedings. The slow economy took its toll on a commercial real estate owner and forced the bank’s hand to initiate foreclosure on a privately owned retail gasoline station. Phase I and II investigations revealed that a release of gasoline occurred at the facility and was migrating off-site, potentially putting down gradient residential neighborhoods at risk. Earlier investigations conducted by others concluded that conditions were similar to environmental response actions closed-out years earlier, but SAK determined the high concentration of the gasoline additive methyl tert butyl ether (MTBE) and low concentrations of petroleum hydrocarbon chains indicated that a new release had occurred. Testing of the underground tank system found that supply lines were leaking. The magnitude of the release was determined and planning costs for remediation was estimated. SAK’s work quantified environmental conditions at the site and facilitated successful auction of the property.

“MTBE is an excellent indicator of the relative age of a gasoline release,” says Stephen Sakakeeny, Principal and Licensed Site Professional for the project. Unlike petroleum hydrocarbons such as Benzene, Toluene, Ethyl Benzene, Xylenes, and hydrocarbon chains, MTBE is water soluble. Thus, MTBE travels much faster than the other compounds. A spike in MTBE levels is commonly observed far before the heavier hydrocarbon compounds arrive – like smoke before a fire. “This is why the relationship of MTBE to other measured petroleum compounds must be scrutinized to determine if releases are actively occurring,” says Sakakeeny. SAK’s work for the lending institution provided early detection of a problem missed by others and preserved the property’s inherit commercial value.